Billy Orphan’s Tears came into being after Billy’s band The Orphans broke up. He was also in a band called The Archietypes… I’m not sure which one came first.*

*Ed. note: It was The Orphans.

Sister Joy and I were rehearsing in a cover band with a guy called John Heyworth (a music teacher at Swanbourne High School and composer and another guy…can’t remember his name). The best part of this band was that I got to play a beautiful old Hoffner bass – the same model as the one Paul McCartney played. The only problem was I couldn’t play bass for shit!! We played songs like Friday On My Mind and Venus. We happened to be conducting auditions for a lead guitarist and in walked none other than Bradley Clark (Rockets, Manikins). He didn’t think much of the band but was impressed with the natural, spontaneous harmonies Joy and I were able to sing from years singing three part harmonies around nanna’s piano at our childhood home in Bicton. He invited Joy and I along to his new band’s rehearsal. The new band became Billy Orphan’s Tears and consisted of Billy (lead vocals), Bradley Clark (lead guitar), Dave ‘Rudolph’ Cardwell (bass), Steve Lippiatt (drums), Joy Howard (backing vocals) and Sue Howard (backing vocals and keyboard). Billy didn’t like the idea of two females in his band at all at first, but when he discovered our harmonies actually made him sound better he soon warmed to the idea.

I need to go back a bit here to explain how Joy and I became interested in punk/punk rock music. Brother Bob worked at the ABC as an electronic technician. One day he brought an amazing looking guy home for lunch (mum used to cook up a huge pressure cooker full of spag bol for anyone who happened to drop in on the weekend!). He was amazing looking because he had 6 inch high silver boots and an off-the-shoulder leopard skin top…under his arm he had some vinyl…Iggy and the Stooges’ Raw Power, MC5, New York Dolls etc. His name was James Baker. Our record collection at the time consisted of Cosmo’s Factory, Abbey Road and my first single by some one hit wonder loser called “Oliver” and the song was something about Starshine (don’t get me wrong though…I love the Beatles and Creedence). James changed the Howard musical experience for the rest of our lives. 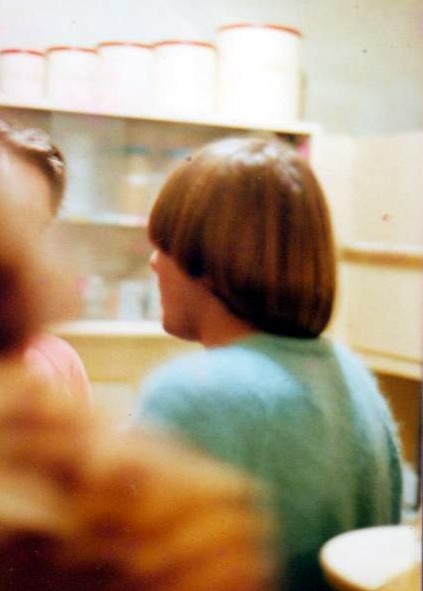 We started going to gigs at the Governor Broome etc to see The Victims and later The Scientists. Joy and oldest sister Lynn went to Europe and Lynn has emailed through a funny memory here.

Joy and I were following The Vibrators around in England in about 1978, back when spitting at the band and pogoing in the mosh pit were fashionable, because James had told us he knew them well and that we should say hello. We eventually plucked up the courage to go backstage and they were all in their underpants! We said “Jim said to say hello”. They didn’t know who we were talking about but eventually we worked out that they knew him as James. Then we had nothing else to say and left after an awkward silence…

Billy Orphan’s Tears played our first gig at The Beaufort Hotel in North Perth. It was packed – all friends and family, of course…we even had our mum, Wendy, there, complete with earplugs. (Funnily enough, she was Ray Purvis’s* legal secretary for about 20 years…every article he wrote on the Perth punk/rock/music scene was written on her old IBM typewriter).

*Ed. note: Ray Purvis was the music journalist for Perth Sunday newspaper, The Sunday Independent, now defunct; he championed The Victims and provided the only mainstream media coverage of the Perth punk scene.

Apparently Mum was slightly intrigued by Billy’s tight silver pants that didn’t seem to do up very well at the front! I remember the gig going down quite well although it was all a bit of a blur. I do remember Andy Macpherson* (drummer for Enemy Sounds, now deceased) calling me over to the front of the stage at a break and then spitting a mouthful of water at me…very punk!! Andy and I were actually really good friends and much later when I came back from Sydney in about 1985 we played a few horrible acoustic gigs with an amazing singer called Leon Bozanich from Mukinbudin at the Boomerang Hotel in Vic Park. We were paid in drinks, although the management soon realised after about 3 gigs that we were able to consume an unheard of amount of scotch and coke while playing and decided it was going to send the hotel broke. We had heaps of fun though. We did a rendition of the old Porgy and Bess soul song Summertime but changed the lyrics to “cotton’s jumpin’ and the fish is high”! The audience didn’t blink an eye but we were in stitches and unable to carry on for a few minutes!!

Back to Billy Orphan’s Tears. Billy’s girlfriend at the time, Lisa, didn’t take to Joy and I being in the band at all. She even threw my shoes away, which she found after a rehearsal. It didn’t take long, though, for Lisa to become great friends with Joy and I, and she became our biggest fans. Even back in those days I can remember her turning up to gigs in blue vinyl outfits she’d designed and made herself – she’s now one of Australia’s best and most successful fashion designers: Lisa Barron (see www.lisabarron.com.au). After the Billy Orphan’s Tears days, Lisa was a frequent visitor to our house in Liverpool St, Darlinghurst…but that’s another story.

Billy Orphan’s Tears played a total of nine gigs, mainly at Adrian’s and Blazes. We supported and played a lot with The Teeny Weeny’s, whom I loved. Jill Yates, the lead singer, was unique with a very low voice and great presence. Our last gig was a bit of a disaster. From what I can gather, there was an altercation between Rudolf and Brad (Brad being the winner because he possessed some kind of black belt!). This was the demise of our band. There is an old cassette tape somewhere of our songs. I can only remember a few of them nearly 30 years later: Nightclub, Cretinous You and One More Time.

Brad went on to play with The Manikins, Joy and I went to Sydney with sister Lynn, travelling across the Nullabor in Lynn’s Datsun 120Y. We rented a two story terrace house at 471 Liverpool St, Darlinghurst. This house became the house where anyone from Perth came and hung out or stayed at. There was a mass migration from Perth to Sydney at this time – about 1980. Residents of this house were, amongst many others, Lynn, Joy & Boris Sudjovic (The Rockets, Scientists, Dubrovniks, Beasts Of Bourbon), Roddy & Erica (Roddy Radalj), Alan Stewart & Liz Acres (Rockets), Dave Flick (Dave Faulkner – Victims, Gurus etc).

Joy, Lynn and I sang backups with The Saints on their Monkey Puzzle album – on the track Simple Love – and travelled with them around Sydney getting up on stage every now and then to do “our song” and also Robotman. Joy and I worked at Festival Records in Sydney for many years, my highlight being barging into the boardroom knowing Iggy was in there and getting his autograph under the disapproving scowls of the PR guys – he signed as “James Osterberg”. Later, I had my whole record collection stolen and this precious keepsake along with it…that’s Sydney for you!

Anyway, Lynn and I returned to Perth but Joy stayed on and still has a really successful musical career. She played guitar in a band called The Whippersnappers who amongst other things played a wonderful version of Stairway To Heaven on Andrew Denton’s “Money Or The Gun”. They also did a great version of Sweet, Sweet Love on the Russell Morris tribute album and played a track on the Kiss tribute album…can’t remember which track though. She also played in a female band called Jill Wran, Jill Wran. One of the members was Dave Faulkner’s sister Steph. Joy is now in a wonderful duet called Joy & Lara (see www.joyandlara.com and www.myspace.com/joylara and they’re about to release their 3rd CD in Sydney. Lara plays violin in a band called Fourplay that is well known internationally, doing versions of songs like Metallica’s Enter Sandman on strings and a great version of The Strokes’ Reptillia.

Well, that’s about it for this brief history of Billy Orphan’s Tears and the Howard family musical journey. It was such a great time and has been even more fun remembering!!

Ed. note: In preparing to fashion her recollections into written form, Sue exchanged multiple emails with her siblings, Lynn, Joy and Bob, also cc’d to me. I enjoyed watching on as these exchanges took place, and felt that some of the spontaneously offered comments complemented Sue’s written piece and were worthy additions to the tapestry of perceptions of the early punk era in Perth that are presented on this site. Lynn, Joy and Bob Howard graciously agreed to my request to include excerpts from their emails here.

Lynn, Sue and Joy Howard and friends – way back when…