As you get older, you are less and less affected by news of the deaths of people known to you. It’s always a bit of a jolt, but having been around for well over half the average human life expectancy, I’ve reached a point of choice – get philosophical or get spooked. Not relishing the prospect of an existence even more haunted and death-obsessed than mine already is, I do my best to choose the former, but every so often a SIGNIFICANT death sits you back on your arse and you find yourself immersed in the dark stuff, almost as if any other choice is not yours to make.

Thus it was for me when news came through of the death of Ron Asheton, incendiary guitarist for legendary Detroit proto-punk band, The Stooges (second from left in this 1969 pic). 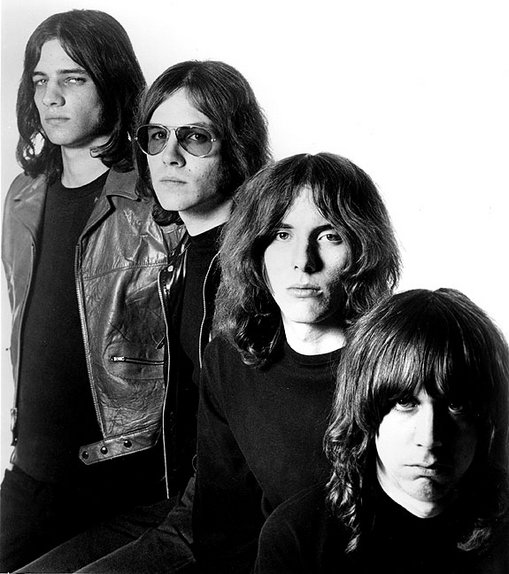 I was at the computer on this morning of January 7th, 2009. I routinely brought up the Sydney Morning Herald site (my default home page) for maybe the tenth time that day and there it was. I didn’t click on the headline at first. Not sure why. Didn’t want to acknowledge it, perhaps. Shock? Some sort of wilful disengagement? Doesn’t matter. Ron Asheton was dead. That mattered.

By fortunate happenstance, I was a Stooges fan before the punk rock movement rescued them from probable cultist obscurity – one of very, very few in Perth at that time.

I remember the Saturday morning of my conversion. It was back in 1974, in my last teenage year. My friend Lloyd, who was a maniac buyer of rock records, would arrive at my place (actually, my parents’ place – I had not yet flown the coop) with a dozen albums tucked under his arm. These were mostly that week’s purchases from 78 Records. I’d never seen anyone walk in and buy that many at a time until I got to know Lloyd. In the service of my musical education, he would include among the week’s new purchases others he already had. One such this Saturday morning was The Stooges’ second album, Funhouse.

He’d previously introduced me to their third album, Raw Power, but apart from the tearaway rocker Search and Destroy, which I recklessly after a couple of listens declared the greatest rock song ever written (I’ve only slightly moderated this view in succeeding years), it was too far out for me at the time. It seemed nightmarish, freaky, cacophonous and weird – and indeed, at the time, so it was! Bowie’s strange narco-twilight mix didn’t help.

The opening track of Funhouse – Down On The Street – changed everything. What a riff! The Stax-Records-flavoured stop-start punchy bass, the choppy guitar with the bendy-string Marshall-distorted refrain niggling away every two bars, the drums… Talk about visceral! I’d never experienced BEAT like that. I still haven’t. Then came The Voice…

That Saturday morning was the beginning of the story of my conversion to the Detroit rock of The Stooges and the MC5 and the musical and social mayhem that followed in the years ahead – interested parties and masochists, see The Geeks Story and Lloyd’s Perth Punk Memoirs for the rest of the tale in lurid detail. But that is an aside. This is a tribute to Ron Asheton and the band he co-founded and helped to shape, not of my brief and inconsequential time, many years ago now, as a Perth punk initiate.

A fellow initiate, Rod Radalj, met Ron Asheton during one of his post-Stooges band tours of Australia. Rod tells me Asheton was a warm, personable bloke without airs or pretension, who was keen to chat once he knew he was in the company of a Stooges devotee. Apparently he and Rod ended up drinking and rapping on like old mates long into the night, during which Asheton divulged his guitar secrets – the chord formations and voicings he used, how he got the tones you hear on the Stooges’ records – and demonstrated how he discovered this and that riff, etc. Pretty thrilling stuff for any Stooges freak.

I didn’t know the guy, except through The Stooges’ music. Apart from passing on Rod’s story, I have nothing to add to the biographical material that has erupted across the web since his death was announced.

Here are some links to a few of the better articles and blogs I have chanced upon:

The comments from readers of the numerous online tributes to Asheton speak of the influence and reach of The Stooges, a once-spurned band of social and musical outcasts. Generations on from their collapse as commercial failures and drug tragics, The Stooges are a landmark band for many folks, and are now justly acknowledged for their pervasive influence on numerous bands that came later – indeed, up to this day.

Asheton, incidentally, was the only member of The Stooges not to end up in drug quicksand. Going by his interview in Legs McNeil’s Please Kill Me, he took on a mother hen role within The Stooges. On one occasion, the story goes, Asheton was so tired out guarding the quaalude-gobbling Ig that he hand-cuffed their wrists together while he slept, fearful of the consequences should Mr Osterberg be let off the leash unsupervised.

The line of Asheton’s from Please Kill Me that I most readily recollect, though (and with my memory, I can’t vouch that this is word-perfect), is his observation about Patti Smith that begins “Not many people know this, but…” – anticipating something profound, I read on with bated breath – “…Patti has enormous tits.” He then goes on to explain that she hid her apparently considerable assets beneath blousey apparel. Well, now you know.

The composite picture I have of Ron Asheton, derived from readings and hearsay, is of a modest guy whose interest was the music, not the celebrity scene, who preferred to stay ‘ordinary’, yet whose singular guitar work and incredible riffmanship was intrinsic to the extraordinary sound and output of his beloved Stooges. His contribution has been largely unheralded until now, probably because the spotlight has always been on Iggy – most understandably! If you don’t know what I’m talking about, google Iggy + Stooges + coke bottle mutilation, or Iggy + Stooges + peanut butter, or Iggy + Stooges + indecent exposure, or Iggy + Stooges + crowd walking.

Actually, I’ll save you the trouble on the last one. Check this out (the walk is 4 minutes in, but the action starts at about 2:50 – and keep an ear out for the hokey commentary).

No other member of the band is gonna complete with that. Somehow, I don’t think Ron minded.

He and The Stooges started off in Ann Arbor, Michigan, outsiders in their own town, and that’s where it ended for him, back home – alone. But then, when it comes down to it, we all end alone. At least he went knowing that The Stooges had finally been paid their dues, not financially perhaps, but in terms of acclaim and acknowledgement. You know, I think that’s all that would have mattered to him. And that, in any terms, is success.

The death of Ron Asheton has been with me ever since the news broke. Another rap on mortality’s door. They’re coming louder and more often these days.