Perth Punk Rock: In The Beginning…

CREATION MYTH
IN the beginning was the word, and the word was punk. And the genesis of punk in the sprawling, stranded, sun-struck mega-suburb of Perth, Western Australia, was The Cheap Nasties. Fronted by a young Kim Salmon, The Nasties crawled out of the primordial cover band slime that was West Oz rock in the 70s and took the first brave evolutionary steps that were to lead to the development of the globally acclaimed Perth powerpop sound: Perth punk was born at their Rivervale Hotel gig in 1977. Then followed The Victims – James Baker, Dave “Flick” Faulkner, and Rudolph V – by critical and popular decree Perth’s seminal punk rock band, blasting their way into legend with their great garage powerpop: I’m Looking For You, High School Girls, Flipped Out Over You, Disco Junkies, Teenage Dreamer, TV Freak, There Is No Way Out. Add to the mix the Nasties’ next two incarnations, The Veneers and The Manikins, with a quick nod to historically more obscure and mostly very ephemeral formations like The Invaders, The Exterminators, The Hitler Youth, The Orphans, Blok Music (early Triffids incarnation), The Susans, The Marilyns and Secret Lives, and you have Perth punk genesis in a nutshell, right?

WRONG!
IN the beginning was not the word “punk”, but a music and attitude that can be traced to the pounding would-be-delinquent rocknroll heart of – mostly – America…music that predated by more than a decade the punk label coined by Legs McNeil in the mid-70s in response to the CBGBs eruption in New York, and subsequently hijacked by the Brits circa Sex Pistols, Clash, Damned et al. But punk rock history is not the concern of this site, the focus of which is narrower, the aim more modest – that is, to set the record straight on the history of first-wave punk in Perth, WA.  So, let there be light…

FACT: PERTH PUNK HAS TWO GENEALOGICAL LINES
While The Cheap Nasties were the first band to gig publicly in Perth as self-proclaimed punk rockers, there was another genealogical line of Perth’s earliest punk, traceable to a band that played without a fixed name, posthumously referred to as The Geeks (or, incorrectly, as The Hitler Youth, occasionally as Beheaded, or Geeks/Beheaded). And as those few insiders who heard The Geeks performing their original punk alongside frenetic covers of The Ramones, The Stooges and The Modern Lovers will testify – Rod Radalj (aka Roddy Rayda) and Mark Demetrius (erstwhile Rolling Stone writer) were notable witnesses – this band were not just some casual loose formation blasting out a few noisy primitive half-formed punk rock toons in the proverbial garage. The Geeks had their own sound and built a repertoire of great original punk rock songs that were subsequently acclaimed as classic Victims songs (yes – read on).

Make no mistake  – although, until now, they have been recognised only as parenthetical reference points in the context of James Baker’s legendary career, The Geeks were  the real deal. In fact, in January 1977, in their earliest formation, the band that became The Geeks were the only punk rock deal in Perth, and with the exception of Radio Birdman and The Saints, the only deal in Australia…that is, as far as they knew.

Post the event, claims to the crown of first punk band in Australia have issued from every state; indeed, Kim Salmon states that The Cheap Nasties were formed in 1976 (see Kim Salmon’s Perspective). Who really cares? Neither band knew of the other prior to the Nasties’ first public gig at the Riverdale Hotel in mid-77, and both thought they were the first, and only, punk rock band in Perth. For the record, The Geeks can claim punk roots going back as far as 1974, to James Baker’s New York Dolls-inspired Slick City Boys. 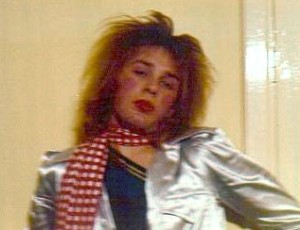 James Baker in The Slick City Boys (1974) – a long way from Barnsey, Farnsie and Thorpie. In Perth in 1974, garbing yourself thus was risking abuse, battery or worse.

Further, with the founding members, Lloyd and I, having ‘discovered’ and become devotees of Detroit rock (Stooges, MC5) that same year, there can be no doubt about the punk pioneer credentials of The Geeks. The point has also been raised that while The Cheap Nasties dressed the part, donning the standard punk uniform of short hair, wraparound sunnies, black leather jackets etc, some might assert that musically they barely qualified as ‘punk’, whereas reference to the recorded evidence leaves no doubt that The Geeks were a bona fide punk rock band, albeit with a personality and take all their own.

Whether The Cheap Nasties or The Geeks were Perth’s first punk rock band is academic. The point is that Perth’s punk rock history can be traced back to twin roots – The Geeks and The Cheap Nasties – and until now only one band has been properly acknowledged. This is an injustice, because there is no doubt that The Geeks’ original material was by far the more significant and influential. How so?

FACT: THE GEEKS SPAWNED THE VICTIMS – AND THEIR CORE REPERTOIRE
From the Geeks came the rhythm section of The Victims, James Baker and Dave “Rudolph” Cardwell, AND a great number of the songs The Victims later publicly claimed as their own, and for which they were revered. The following Victims standards were Geeks songs originally: I’m Looking For You, High School Girls, Flipped Out Over You, Disco Junkies, TV Freak, There Is No Way Out and I’m In London (later re-titled Teenage Dreamer by The Victims, subsequently recorded by The Scientists, and re-written as Death Hurts by The Hitler Youth). These songs were co-written by James Baker and I during The Geeks’ short but incredibly productive life, with Lloyd contributing melodically to some vocal lines, and were fully formed, performed, and late in the band’s short life, recorded in rehearsal (along with some others that are included on The Geeks CD – see below). The Victims’ versions of these songs were, quite literally, unacknowledged covers of The Geeks’ originals, virtually identical lyrically and musically. The only exception is High School Girls. While having James Baker’s lyrics in common, the Victims’ version does vary very slightly melodically, although the underlying chord structures are identical to those I wrote in the original as played by The Geeks, and for all intents and purposes it is the same song.

The Geeks Original Recordings Now Available For Download
Now, available publicly for the first time, are all that remains of the original recordings of the Geeks songs, remastered from the 1977 tapes. Initially released on CD as an album entitled Burned, the songs are now downloadable.

The recording is rough, baby, but what do ya want from Perth’s “other” first punk band 36 years down the track?! Dicky mikes, shitty sound and rough performances notwithstanding, I think The Geeks’ songs in their original form have more heart and charm than The Victims’ versions, especially I’m Looking For You and High School Girls. Sure, as a founding member of The Geeks and co-writer of the band’s original songs I may be justly accused of bias, but I am not alone in my assessment. I provided Geeks and Victims drummer and lyricist/co-songwriter James Baker with a cassette copy of the Geeks recordings some years ago and he, too, admitted to preferring The Geeks’ versions. Evan Dando (Lemonheads) is rumoured to have heard the tape I gave James Baker and been knocked out by The Geeks’ original High School Girls. The few others who have heard The Geeks recordings have also raved, murky production notwithstanding. Have a listen and decide for yourself:

The Burned album comprises all the existing recorded Geeks material (tracks 1-9). Or, you can download individual tracks.

Also included is the full recorded repertoire of the band that rose like some enraged, manic, demented beast from the ashes of The Geeks – The Hitler Youth (tracks 10-20). Wild, incandescently energetic, shockingly tasteless, unique…if there was a more extreme punk band anywhere in the world at that time, I have yet to hear recorded evidence.

PLUS, the album concludes with 3 bonus live tracks from The Orphans, whose sizable repertoire of quality songs have to rank with the best to come out of the Perth first-wave punk era (see The Orphans Story on this site).

That’s the hard sell out of the way. And now, for those who are interested, here on this site, for the first time, is the unexpurgated story of The Geeks and a full account of the genesis of Perth punk rock, told by the only folk who were really there in the very beginning – the founding members of the band.